Mallory Rath
Amazon Alexa /
Creating the perfect companion for users on-the-go.
An exploration into the potential value Alexa can add to our daily lives outside of the home. 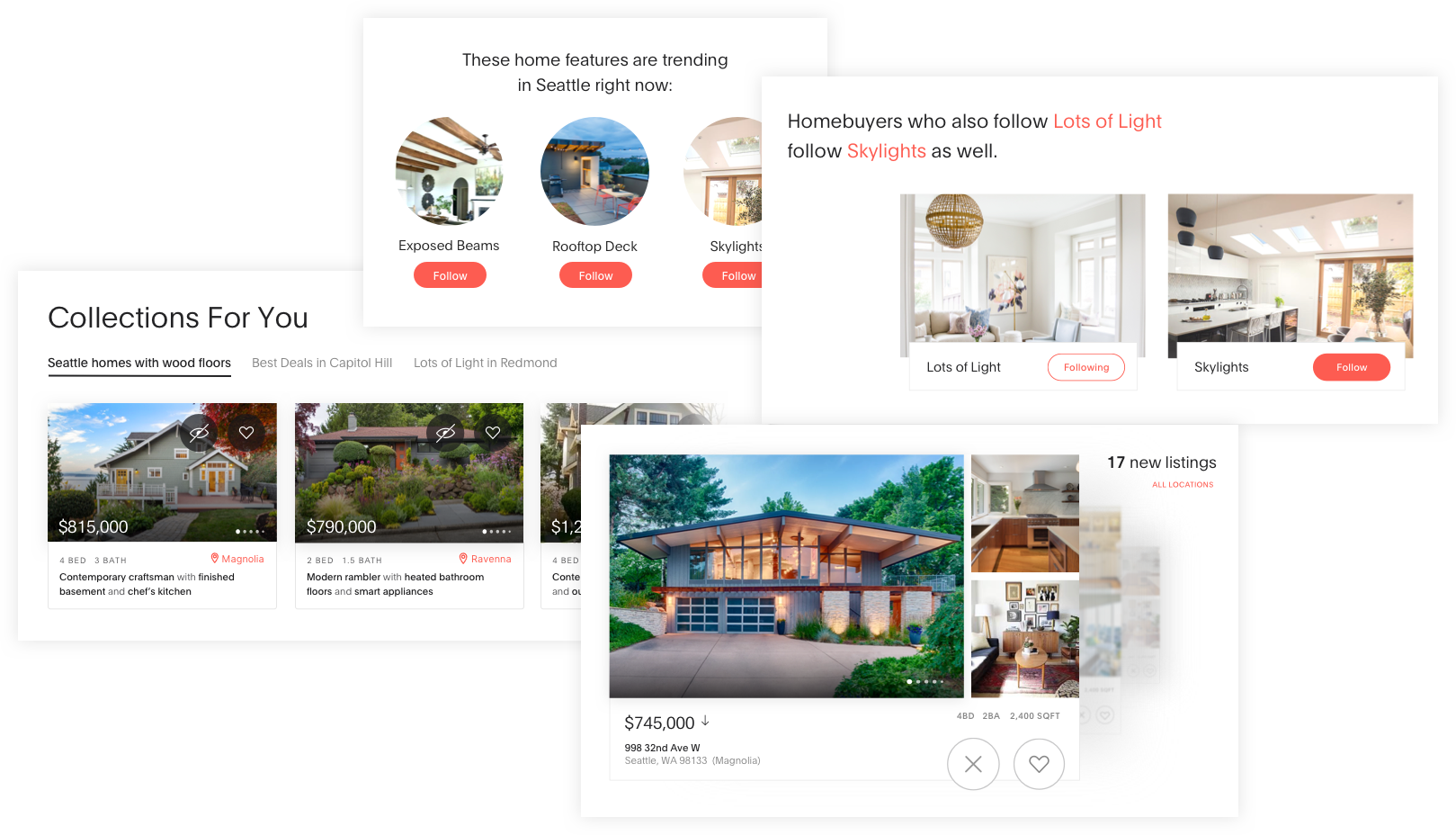 Objective: Design contextually useful features that make Alexa an indispensable, hands-free resource outside of the home or car.

Amazon hired Fictive Kin for an eight-week project exploring hero experiences for using Alexa on-the-go through headphones and earbuds.
‍
The purpose for the project was to come up with contextually useful feature sets that would make Alexa an indispensable resource outside of the home or car, specifically in the travel, fitness, and leisure segments.

The final deliverables were a 34-page report, two vision videos, and a UI framework. These were used internally by Amazon to scope future work and drive partner engagement.
‍
I lead the user research and team brainstorming portions of the project, and then based on our findings and ideation, I created a UI framework showing how the new Alexa on-the-go features could fit into the existing Alexa mobile app.

Due to confidentiality agreements, this case study will only vaguely cover the research and process parts of the project.

Team
01
Challenge
With a Lager dongle, hardware engineers can communicate to their devices through the Cloud and access their data files from anywhere.
Docklight is an industry standard software that hardware engineers often use for their serial communication needs when testing and debugging devices.

‍
Our challenge was to maintain feature parity with Docklight while solving three big problems it presents:
1. It requires you to plug in your device with a USB, limiting distance and movement allowed during testing
2. The files it spits out directly onto your computer desktop are poorly named and pile up quickly.
3. The interface is cluttered and non-intuitive
‍
While the team was hard at work building a wireless dongle that communicated through the Cloud, I worked on designing an experience for hardware engineers that would help them organize their data files and move about the interface with ease.


My challenge was to maintain feature parity with the industry standard software, Docklight, while designing an experience that would help hardware engineers organize their data files and move about the interface with ease.

All major real estate companies use the same configuration for their search page: a search field and filters above a split screen of listings in a grid and a map.
01
Challenge

Using a mobile phone while on-the-go can be inconvenient, unsafe, or even impossible. Voice assistants have the potential to mitigate these issues.

In September 2019, Amazon released their proprietary Alexa-enabled earbuds, called Echo Buds. Alexa was also beginning to surface as a feature on many third-party headphones and earbuds (collectively referred to as "hearables"). This presented a new context where Alexa had never been before: the outside world.

Introducing Alexa to the outside world presents endless use cases, but also comes with many obstacles, like lowered attention span, and the social awkwardness of speaking to a voice assistant in public.

Our challenge was to come up with a vision for Alexa’s capabilities outside of the home that would excite both current at-home users and potential new users to further grow the Alexa userbase.

We spent the entire first day of the project at Amazon’s HQ getting up to speed.
‍
Throughout the day we met with multiple teams within the Alexa ecosystem, from Engineering to Partnerships. The varying perspectives and concerns across the org gave us a lot of context for shaping the final deliverables so that they could be used by all 15 people who were in the room during the final presentation.

The uses varied, for example, the Engineering team would use our deliverables for technical scoping while the Partnerships team would use them for B2B marketing.

We researched the three experiences that would overlap to inform our solution: using Alexa, using headphones and earbuds, and being on-the-go.

The content strategist and I worked together in the first two weeks to rapidly research these scenarios. They led the desk research and phone interviews while I conducted an online survey, did a few phone interviews, and created five personas based on the interviews.

I wrote the interview guide and we worked together to conduct 13 interviews with people that fit into our five on-the-go segments.

The content strategist collected published studies on the market and trends in the voice assistant sector.

Using data given to us by the client, we tested and looked at reviews and ratings of the most popular skills overall as well as in the five on-the-go segments.

I conducted a survey with questions about headphones and earbuds as well as voice assistants. The survey collected 88 responses.

We then synthesized all of our research and using our findings, I created five personas for each of the segments.

We also created journey maps, showing the persona's ups and downs throughout their on-the-go scenario. We used real quotes from our interviews to illustrate the pain points in the journeys. (Unable to show due to confidentiality agreements.)

Our research, personas, and user journeys gave the Alexa team clarity around their users and the segments we were designing for, and gave us the empathy and insight we needed to begin ideating. 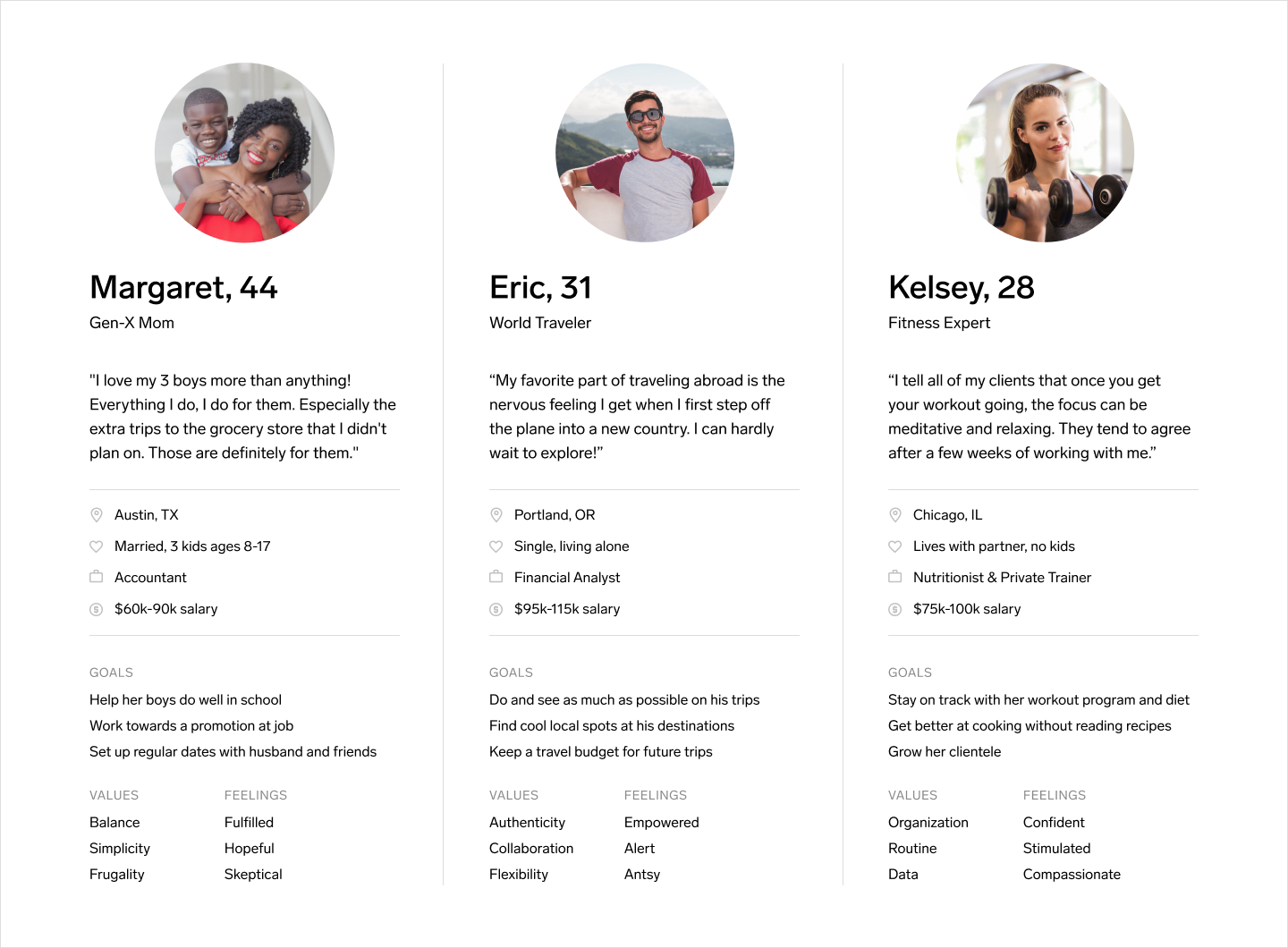 Condensed sample of the personas I created.

Inviting others into our brainstorming sessions resulted in a wide array of ideas and made sure we thought of every possibility.

I conducted two remote brainstorming sessions with six of my coworkers at Fictive Kin. I sent them the three personas the client wanted us to focus on to review, and set up spreadsheets where we could all work together. I chose to use Google Sheets so that they would feel comfortable moving around in a program they were familiar with.

For each persona, I set a timer and instructed them to type in as many pain points they could think of. Then, we repeated the cycle by thinking of solutions.
‍
Although our team had already brainstormed pain points, doing this exercise again with a fresh set of eyes surfaced pain points we missed and also showed us which pain points might be more universal than others.

Our research, videos, and UI framework inspired a lot of cross-team discussion during the presentation.

It was clear we gave them a lot to think about and work with.

Due to confidentiality agreements, I am unable to share any ideas or assets related to the final deliverables.
‍
However, we heard positive feedback from the project lead at Amazon, who followed up with us to say our work "put [the Alexa team] in the right spot to move forward."

This was one of the most interesting projects I've ever worked on. I especially enjoyed the problem-solving aspect of designing a hands-free experience in an environment where interruptions were to be expected and timing is everything.

It also gave me an inside look at what it is like working in a large org where communicating across multiple teams is imperative for everyone's success.

I'm excited to see how Alexa grows and evolves!

Built with Webflow. Fonts by Letters From Sweden and Colophon Foundry.